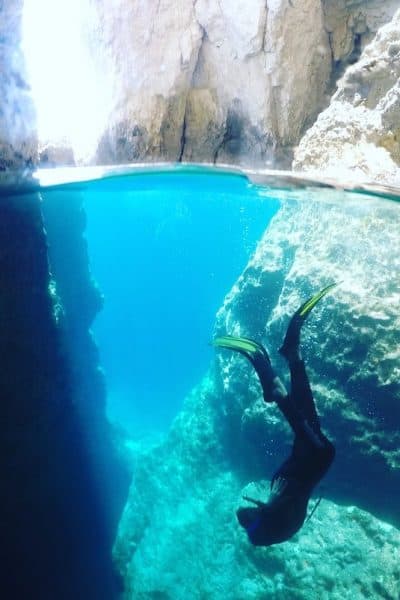 A holiday on a sailboat in the nature of Greece’s Ionian Islands. There are many stages and the possible routes that you travel together lounging in the many bays with crystal clear waters and beautiful beaches, savoring the flavors of the local taverns, walking in the colorful villages or dinner on board under the stars. Navigation is not binding, also suitable for the less experienced, full of contact with nature and relaxation. These seas are the theater of the mythical Ulysses’ journey back to his beloved Ithaca and have been at the center of important historical events, the rich commercial traffic and endless quarrels over the centuries. Sailing holidays in Ionian Greece, between the islands that are rightly considered a paradise for lovers of sailing. The archipelago consists of seven major islands and a multitude of minor islands, uninhabited atolls and reefs. The islands are arranged in a fan from the nearby coast: from north to south are the Diapontian Islands, Corfu, Paxos and Antipaxos, Lefkas, Skorpio, Meganisi, Kalamos, Kastos, Ithaca, Kefalonia, Zante and Kitira. They are mountainous islands, with a warm, mild climate that collects abundant rains in winter but keeps almost no rainfall in summer. Sailing holidays in Ionian Greece, in the big blue! 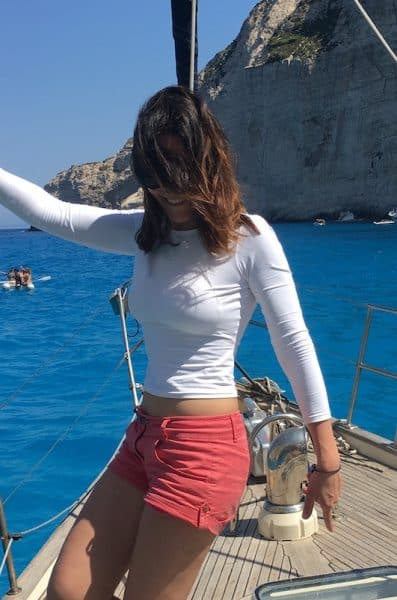 The origin of the “Ionio” name is traced back to the name of the nymph “Io”, one of the many female characters beloved by Zeus, who was forced to take refuge in this part of the sea – which took her name – to escape the wrath of his wife “Era”

Crossing the Strait of Otranto from the Italian coast and heading to Greece, we encounter the Diapontie Islands, north-west of Corfu, an archipelago of small islands Othonoi, Erikoussa and Mathraki, as well as several rocks and islets. The arcipelago in the past times was an important crossroads between the Ionian and the Adriatic; today, being out of the main tourist routes, their existence is even unknown to most. A small population of fishermen still live on the islands, which preserve a wild charm, a stunning nature and untouched and picturesque views.

Corfù is the most northerly of the main islands, the second largest and by far the most cosmopolitan. Thanks to a particularly favorable climate, Corfù has crystal clear waters and lush green coves. The island has a long history, from the ancient Greek civilization to the dominion of the Roman Empire. In modern times la Serenissima – the Republic of Venice – controlled the island and the area for about four centuries, leaving clear signs in architecture, language and culture. Subsequently annexed by Napoleon, Corfù was then a British protectorate until 1863. Not only golden beaches, green forests, quiet coves and turquoise sea, as well as churches, museums and forts to visit. The old town is Unesco World Heritage Site, a maze of narrow cobbled streets that open into a myriad of small squares with typical restaurants and shops. The tourist season is longer in Corfu, offering the best during the Spring and in Autumn, when the weather is less hot, but the atmosphere is always lively.

Legend says that Paxos was created by Poseidon with a shot that he settled down to Corfù land with his trident, thus forming a small secret paradise to share with his wife Amphitrite. No longer a secret, Paxos is a classic destination for all the crews and sailing charter boat that head South of Corfù directing to Lefkada and stop in its ports to discover the beauties of the island. The West coast has some beautiful coves and caves to visit in the morning, when the open sea is not yet formed. On the eastern side, coming down from the North, Lakka Bay with its clear waters of a turquoise  that is difficult to describe, is the first mandatory stop. Inside of the creek, the village is charming, with the square and the houses lapped by the sea. Island’s capital is Gaios, a lively and colorful village, well-kept and teeming with life. A little further South, the island of Antipaxos has crystal clear water and wild nature. The island has no infrastructure and is almost free from settlements. During the morning before the arrival of the tourist-boats full of daily visitors and in the evening with their departure, the island has a wonderful sweet stillness. 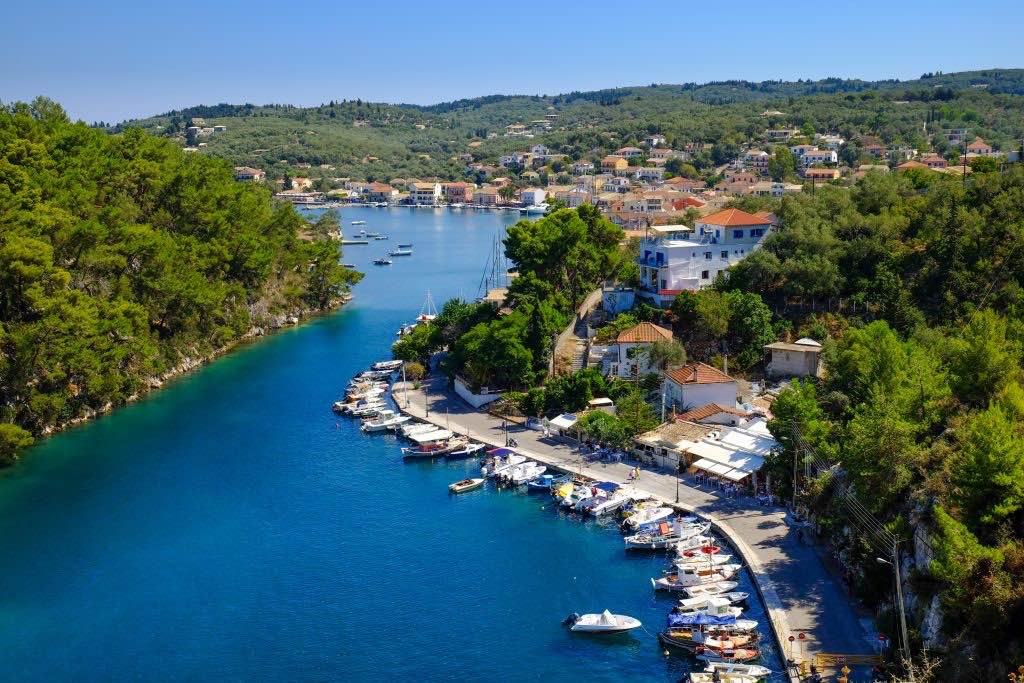 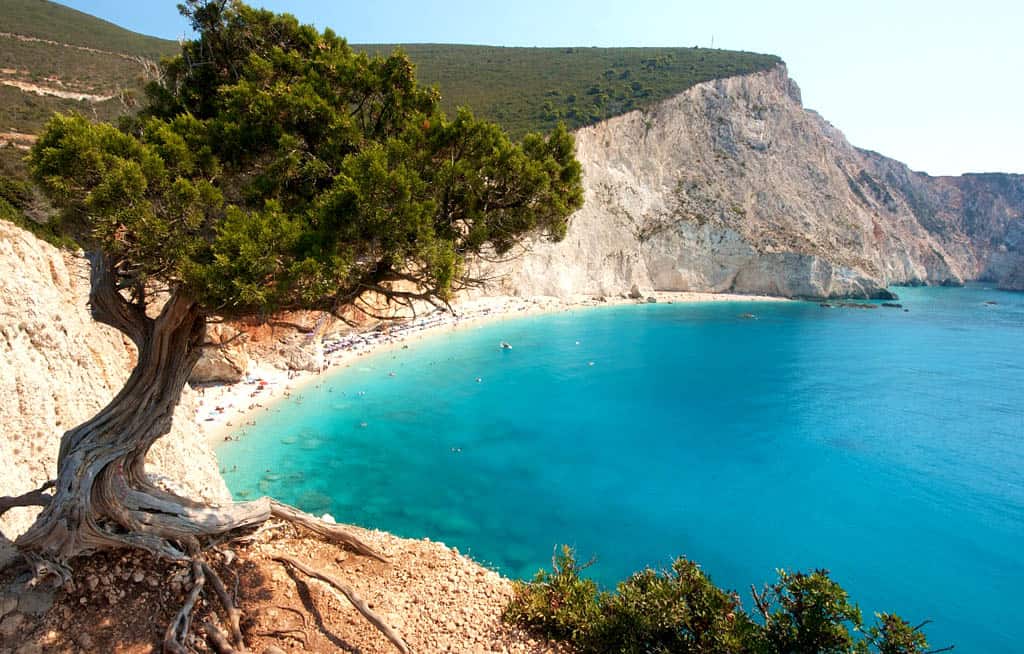 Lefkas is connected to the mainland by a swing bridge that opens every hour to let boats enter along the canal that separates it from the mainland. The island has a mountainous and isolated hinterland, with spectacular spots. The west coast is famous for its beaches, considered among the most beautiful in all of Greece. At the bustling center of Lefaks town the atmosphere is lively, with its numerous shops and stores, and its wooden houses and coloured sheet metal, so rebuilt after the great earthquake of 1953. The beaches and bays are many and all beautiful. Between the East Coast and the nearby mainland it opens the so-called Inland Sea, dotted with several islets and rich in bays and coves, perfect for sleeping under a sky that we forgot to be so full of stars. It is in these waters, along the many islands and bays that we will sail during the holidays at the sea.

Meganissi is a beautiful and picturesque island of the archipelago Lefkada island, the largest of the smaller islands. Here man and nature meet in a land untouched and clear blue sea. Natural paradise of the Ionian Sea, with lush vegetation and rugged coastline that form deep bays, ideal for mooring in the evening and enjoy the turquoise sea for a midnight or morning swim. On the western side of the island, several natural marine caves are worth a visit and a swim. Starting from the port of Vathi, through a road of many twists and a short climb, you get to Spartachori, which is the biggest village of the island, a tangle of narrow streets, the characteristics white houses and blue. From here you can enjoy a lovely view, at 180 degrees on the so-called Inland Sea, the canal of Lefkada, the island of Skorpio, which was Onassis, and the mainland on the East. Inland we suggest to visit the Monastery of St. John the Baptist, built in 1477, it was destroyed by pirates who swarmed in these seas. Legend says that pirates threw the icon of the Saint in the sea: fishermen recovered the icon that was restored back to its place by a nun, who also rebuilt the monastery destroyed in the raid. 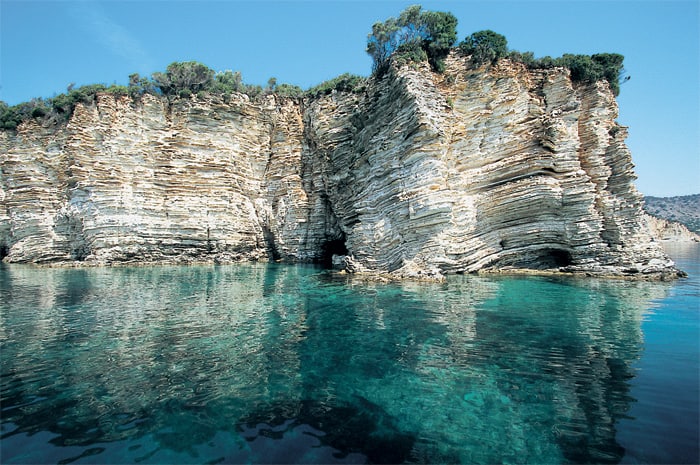 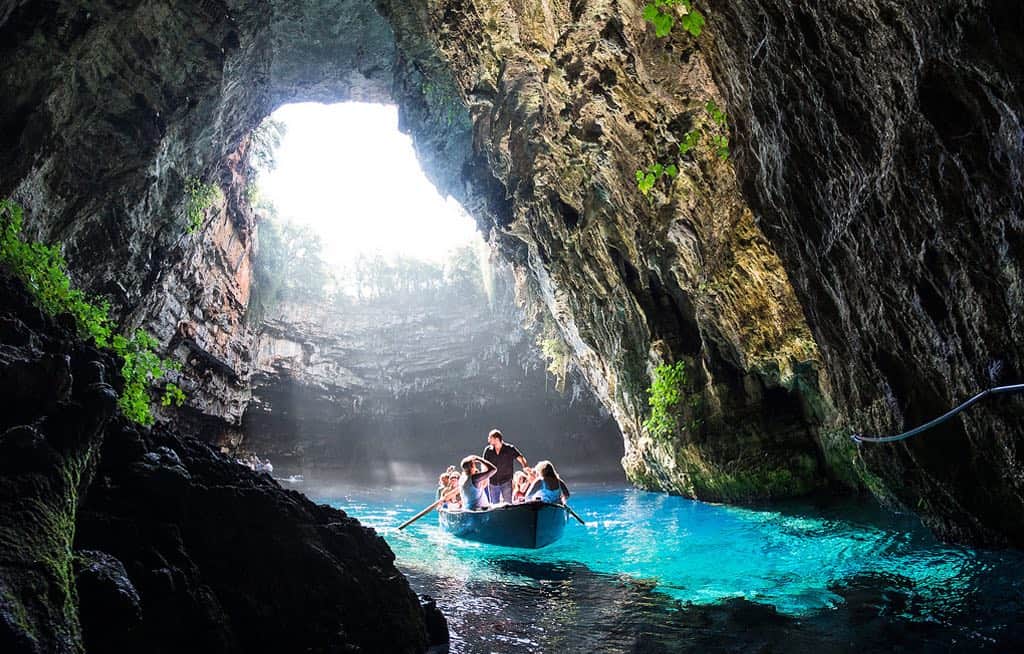 And ‘the largest of the Ionian Islands, characterized by rugged mountains, large vineyards, dramatic cliffs and stunning beaches. Of great interest not only for the sea, do not miss the visit to the monasteries, the Venetian fortresses – such as Assos, in a spectacular location – and the natural cave of Melissani. Kefalonia is rich in archaeological remains of a glorious past. In ancient times the island was one of Ulysses’ possessions and unlike other islands, the Mycenaean era archaeological findings are important and well preserved. Kefalonia is also famous for its wines, especially the very old grape variety Robola must produce some DOC fine. Myrtos beach is one of the most beautiful and famous of all Greece. The villages of Assos and Fiskardo were spared by the earthquake of 1953 and retain its distinctive architecture and beautiful scenery. Fiskardo is the most fashionable resort in the archipelago and will make stops wealthy yacht owners … in addition to our course !! Kefalonia is perhaps the most complete island for a sailing holiday in the Ionian Greece.

Ithaka is the island of myth! It is celebrated as the legendary home of Odysseus, the hero who returned from the victory of Troy, and plowed the seas for ten long years before he could return. It ‘a name that evokes the perennial conflict between the indomitable will of man and the destiny. Ithaca is the same emblem and the adventure of the journey and has been always inspiring poets, writers and artists. This calm of the Ionian gem is formed by two large strips of land joined by a narrow isthmus. He has arid and steep hills with scattered patches of olive and cypress trees, cliffs that are thrown to the sea, giving rise to numerous, coves with beaches of incredibly transparent water pebbles. Vathi is the capital of the island built around the big bay of Molos that almost cuts the island in two. On the northeastern side of the island of Frikes and Kioni villages worth a visit if the mistral does not blow too hard. from here you can climb to the village of Stavros, dominating both sides with unforgettable views. To the south bays are devoid of settlements, pristine and wild; sheltered from that of menstrual Vathi blows rather impressive, they are perfect to still give and spend a night at anchor under the stars. 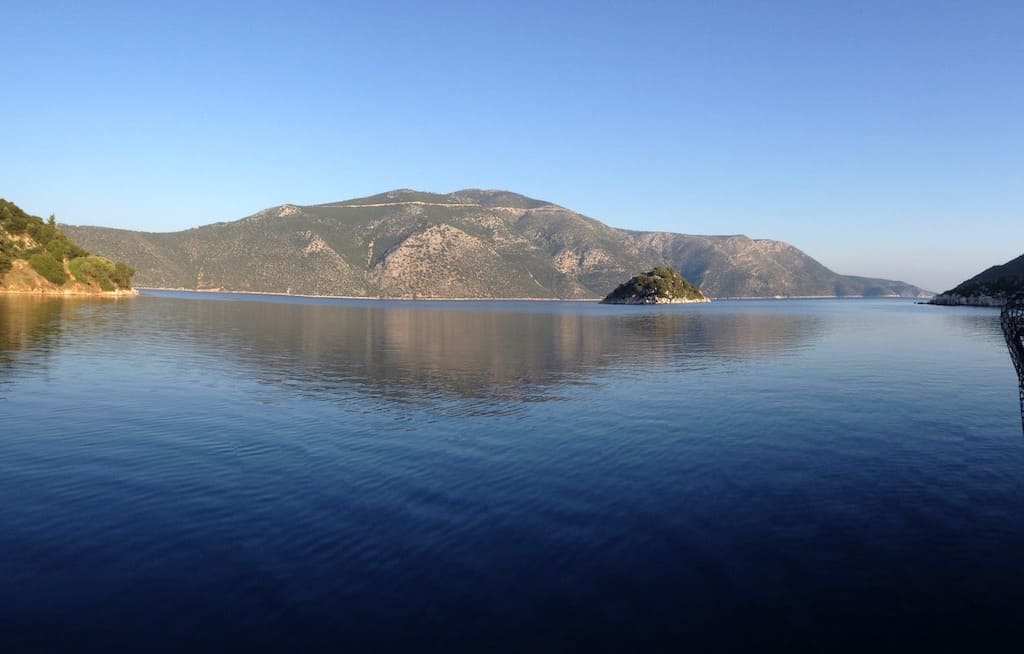 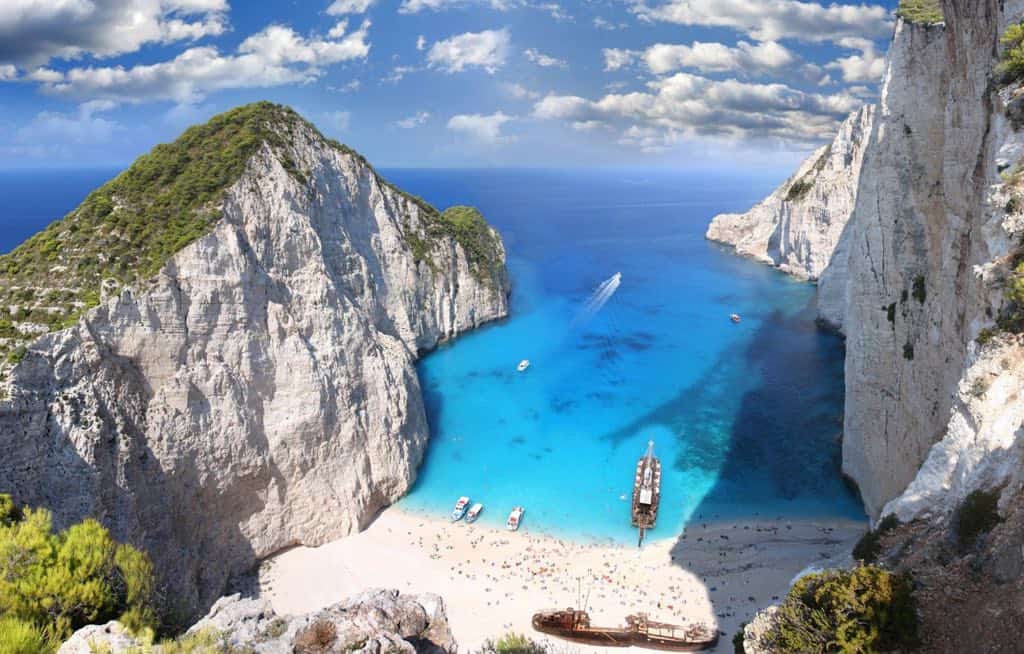 And ‘famous for being the birthplace of the poet Ugo Foscolo. On the eastern side, the most voted to mass tourism, beaches have fine golden sand, the water is warm and clear. On the southern side it is a marine park was established, where nests the Caretta Caretta turtle. As of June each year the turtles reach the beaches to lay their eggs in the sand. At hatching, the small gain to the sea and try to take off. The west coast is rugged and accessible only by sea: offers incredible views, including the Shipwreck beach – the famous “Shipwreck Beach”, whose photos have become an emblem of Greece. There are also numerous caves, where the sun penetrates with play of light and amazing colors. It is exposed to the mistral wind, unfortunately the west coast you can visit only after a few days of calm.

As you set out for Ithaka
hope the voyage is a long one,
full of adventure, full of discovery.
Laistrygonians and Cyclops,
angry Poseidon—don’t be afraid of them:
you’ll never find things like that on your way
as long as you keep your thoughts raised high,
as long as a rare excitement
stirs your spirit and your body.
Laistrygonians and Cyclops,
wild Poseidon—you won’t encounter them
unless you bring them along inside your soul,
unless your soul sets them up in front of you.

Hope the voyage is a long one.
May there be many a summer morning when,
with what pleasure, what joy,
you come into harbors seen for the first time;
may you stop at Phoenician trading stations
to buy fine things,
mother of pearl and coral, amber and ebony,
sensual perfume of every kind—
as many sensual perfumes as you can;
and may you visit many Egyptian cities
to gather stores of knowledge from their scholars;

Keep Ithaka always in your mind.
Arriving there is what you are destined for.
But do not hurry the journey at all.
Better if it lasts for years,
so you are old by the time you reach the island,
wealthy with all you have gained on the way,
not expecting Ithaka to make you rich.
Ithaka gave you the marvelous journey.
Without her you would not have set out.
She has nothing left to give you now.
And if you find her poor, Ithaka won’t have fooled you.
Wise as you will have become, so full of experience,
you will have understood by then what these Ithakas mean.